Today (17th August) is Black Cat Appreciation Day. Black cats are underappreciated – they are less likely than cats of other colours to be adopted from American shelters.

In medieval Europe, cats, and especially black cats, became associated with evil and witchcraft, and many were killed as a result. These beliefs spread to North America. This is probably the reason they are now seen as bad luck in America and most of Europe, which is a possible explanation for their poor adoption chances. In Britain, black cats are traditionally seen as good luck, but in Britain too they are unpopular with adopters. Black cats are also seen as good luck in Japan.

Other people have argued that black cats are unpopular because they are plain-looking, or because they don’t look good in photos.

A few months ago my family adopted a black cat who I’ll refer to as D. His fur is beautiful and fascinating to me. In low light it looks pure black and shines silver, but in the sunlight parts of it light up golden brown. And sometimes you can see faint tabby stripes along his sides. His fur isn’t plain once you get to know it.

[Image description: The head and shoulders of D, a black cat with yellow eyes, seen from the side. He is gazing upwards and is lit by dappled sunlight. His fur shines with a mixture of silver and gold, with stripes visible around his neck. He’s wearing a silver collar.]

It’s hard to see where D is in the dark. This is the only disadvantage of his colour, and he wears a reflective collar with a bell, which helps a bit. In photos of him, pale things in the background tend to be overexposed, but I see this as a challenge to my photography skills rather than a problem. I think I’ve taken lots of nice photos of him with my compact digital camera.

D is one of the gentlest cats I’ve ever met. I used to think having a cat meant getting scratched occasionally, but he hasn’t scratched me once. I even let him use my hands as pretend prey, because he’s gentle when he catches and bites them. He’s very sweet towards me. When I open my bedroom door each morning he’s usually there waiting for me, and he gives my hands a good rub. When I touch him while he’s washing he’ll give my hand a little lick too. 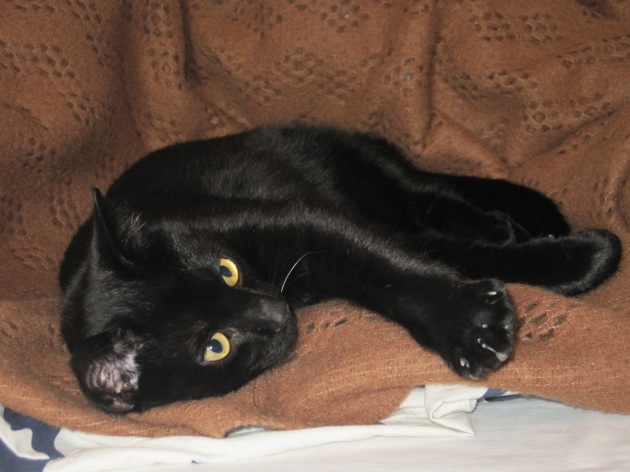 [Image description: D lying on a brown blanket with one front leg stretched forwards. His yellow eyes are open wide.]

He’s also incredibly cooperative for a cat. When we put flea treatment on him he just sits there and puts up with it. He loves being outside, but when it’s time to come inside in the evening he rarely protests.

But he’s an explorer too. He’s always sniffing things outside, and prowling around his territory, and sticking his head into dusty corners of the house. He loves to climb the apple tree in the garden. He was wobbly at first but now he’s confident and agile up there and has been exploring higher up in the branches. But he still gets into precarious-looking situations sometimes. (Luckily the tree’s not too high – he’s fallen from it before and landed on his paws with no problem and we could rescue him with a stepladder if he got stuck.)

[Image description: D in a tree in summer. Most of his body is supported by various small branches and one front leg is reaching towards a thicker, almost-vertical branch. His expression is alert and slightly worried.]

I don’t believe the colour of his fur affects anything other than his appearance and his visibility. But things have got better for me since we adopted D. Having him around helped with the sadness and loneliness I felt after our previous cat died. Stroking him or playing with him cheers me up when my mood is low. I feel very lucky that we were looking for a cat at the same time as he was looking for a home, and I’m really glad we weren’t put off by his blackness. 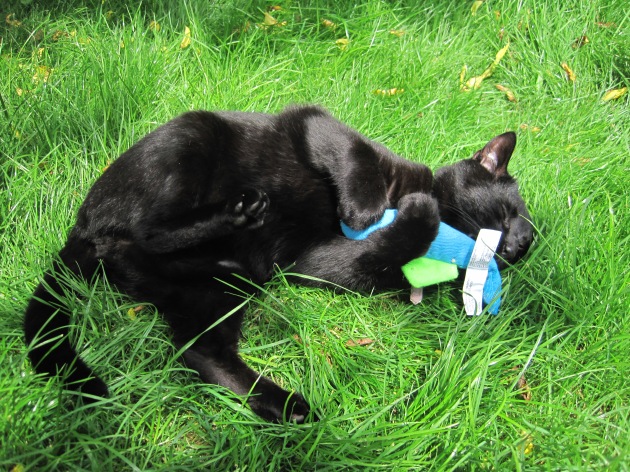 [Image description: D lying on a lawn with his eyes shut, gripping a blue toy fish in his front paws and contentedly biting its tail.]

It’s often said that Autistic people tend to be cat lovers. (Although I don’t know of any survey showing we’re more likely to like cats than allistic people are.) Of course, people of all neurologies like cats because they’re elegant, affectionate, playful or cute. But these are some of my ideas about why cats could have a particular appeal for Autistic people.

I’m not sure of the idea that Autistic people relate to cats because they’re loners. Cats, as well as autists, often seek out and enjoy the company of humans and cats. But cats can become stressed when living with too many other cats, which is probably something Autistic people can relate to.

Nonhuman animals in general give us easy, straightforward companionship. Spending time with a nonhuman animal can bring relief to those of us who need to be with other people but are confused, or treated badly, by humans. Nonhuman animals accept us as we are, and are not nasty to us, and don’t say things they don’t mean.

Cats are often compatible with our sensory processing. Cats tend not to be loud or smelly like other nonhuman animals can be, so they can be a good companion species for people with intense perceptions of sound and smell. Also, one way cats show their affection is by ‘kneading’ – pressing their paws up and down on someone’s lap with claws digging in slightly; kittens do this to their mothers’ bellies when they suckle. Humans often push cats away when they start to knead, which I think must be a bit upsetting for the cat, but autists with low pain sensitivity probably don’t feel the need to do this. I find kneading very relaxing. It’s like being massaged and the gentle pricking of claws feels refreshing. And stroking a cat and hearing him purr is like a calming stim.

Cats don’t like eye contact either. To cats, staring is a threat, and they will break off eye contact to relieve tension. I reckon this helps Autistic people bond with cats, because even if we don’t know not to stare, we’re less likely to look into their eyes anyway, and are less likely to be bothered if a cat doesn’t look at us. But an uninformed allistic person’s attempts to make eye contact with a cat could feel threatening to her.

Traits that are seen as negative in Autistic people are seen as positive in cats. It’s seen as fine for cats to go alone and quietly engage with their own interests, but often less so for Autistic humans. In particular, when Autistic people are described as aloof it has negative connotations, but when cats are described as aloof it’s said admiringly. So cats could make us feel better about ourselves.